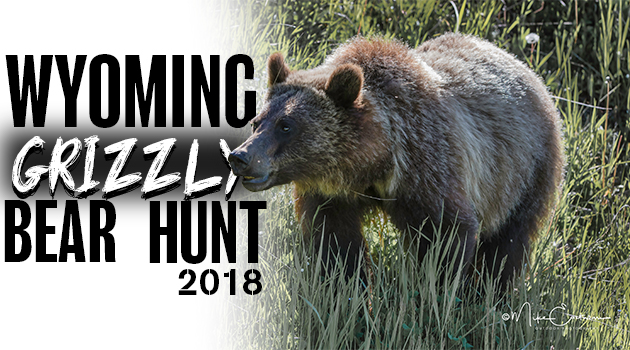 “There is a grizzly bear population robust and healthy enough to sustain a conservative and regulated hunting season.” -Wyoming Game and Fish Dept.

The grizzly bear population in Wyoming hit the predetermined objective of 500 bears in the summer of 2001 based on the Wyoming Game and Fish Department’s own, excessively conservative estimates. Over the nearly 18 years since, the department and commission have been working tirelessly with the US Fish and Wildlife Service to get all the chess pieces in place to finally delist the bears from the ESA, which did in fact happen nearly eight months ago.

Now it’s up to the Game and Fish Commission to approve the details of which have yet to be completely agreed upon for an upcoming grizzly bear hunting season which could take place as soon as this coming fall. The tentative details of these “draft” regulations are as follows:

A max of 24 bears will be harvested in a total of 8 hunt areas. A total of 12 bears (10 males and 2 females) will be taken in 6 areas bordering Yellowstone and Teton National Parks, and another 12 bears will be taken in two areas outside the bordered parks area. The season will run from September 15th to November 15th. The grizzly tags will be issued on a random draw process with no preference points. The cost to apply for a grizzly bear hunt will be $5 (resident) and $15 (nonresident) The cost of a grizzly bear tag will be $600 (resident) and $6,000 (nonresident). Baiting will be allowed outside the 6 park bordering areas, in Area-7. Only 2 hunters at a time will be licensed to hunt grizzly bears in 6 of the 8 areas. Once those 2 hunters are successful, 2 more hunters will be allowed afield. There will be a mandatory bear education program for all grizzly bear hunters. No bear shall be taken within 1/2 mile of a designated highway.

Most of us probably agree that the time has come to hunt the grizzly bear in Wyoming. Sound wildlife management under the North American Management Model, the only conservation model proven to actually work in the modern world by the way, clearly proves over and over again that hunting is by far the best tool to generate much needed funds and value for wildlife, which is critical to the long-term survival of big game including but not limited to the grizzly bear.

Contrary to some radicals, Wyoming’s plan is extremely conservative when compared to the population. The entire hunt quota for bears is just shy of 10% (7% boars and 3% sows) of the known grizzly population in Wyoming. Some experts believe that the grizzly bear count of roughly 718 grizzly bears is drastically low by a factor of as much as two or three. This hunt would not even scratch the surface of a bear population that has been increasing and expanding for decades now.

The distribution of the grizzly bears over the past decade in Wyoming has eclipsed even the known historic range, but also the modern day practical range of the bears as well. When grizzly bear densities hit extremely high levels, which they have now for years, sows are forced to drift to new areas with their cubs in an effort to thwart off attacks on the young by dominant courting boars. This has caused the bear distribution in the Cowboy state to expand even into high human population areas in the low lands, engulfing larger towns and human population bases. The town of Cody now sits inside the known grizzly range, and that is a town of nearly 12,000 people.

Along with the expansion has come some major human bear conflicts not seen in modern history. Schools have had to be high fenced, dumps taken over by bears at night, farmers and ranchers attacked in their own hay fields changing their irrigation water and even a Halloween corn maze that was shut down the day before the holiday as a bear made the maze home before the kids did. These conflicts not only can cause human and livestock mauling’s, but also cost a lot of money. One single rancher in the South Fork of the Shoshone drainage has been compensated over $200,000 alone over the past four years for cattle and crop losses due to wolves and grizzly bears. And that’s just one rancher in one single drainage in one state. Image living in such a beautiful place, a place where you and your family cannot even go outside in your own yard after dark because earlier that day there were 14 different grizzly bears in the oat patch in your field. Yes, it happens and it is causing the residents of this state and those that hunt here a lot of money, headache and available resources that are needed elsewhere.

A 29% increase in range in only six years is a massive increase and anyone who says these bears are still endangered is not using data to guide their common sense and emotion on the subject. It is beyond time to hunt these bears and begin to control their population, distribution and over all long-term outlook. The science of a hunt is the one single tool that trumps all others when it comes to sound wildlife management and health of the herd, species and coexisting components. I tip my hat to the Wyoming Game and Fish Commission and Department for doing what is right and honest in this tough political situation, but I’m not surprised, that is the Wyoming way after all.

As a Wyoming sportsman let your voice be herd, submit a Grizzly hunt comment at: https://wgfd.wyo.gov/WGFD_WebSurvey/CommentOnly.aspx