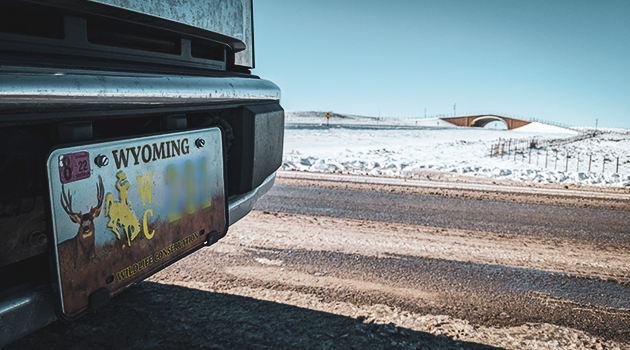 Wyoming Conservation License Plates help fund wildlife overpasses like the one in the background near Pinedale, WY along key migration corridors.

I remember the first time that I saw the giant overpasses outside of Daniel, Wyoming on my way North to do a little sightseeing in Yellowstone country. I hadn’t been to that country in quite a while and was quite surprised to see overpasses with forage and high fences crossing the highway. In those days the cell service was spotty at best and “Googling” the project wasn’t in the cards for a few days. Once home the digging began and I was quite impressed with how much work had been done to get those built.

In the few years following I noticed that the area had much fewer dead deer along the highway; there seemed to be an uptick in animal tracks and trails using the overpasses instead. I was skeptical at first that it would be used but ungulates proved me wrong and I was happy that they did. The high fences that funnel the animals help dramatically as well.

Fast forward a few years and much discussion about wintering bucks and bulls later to where we are now. Research on the relationship between migration routes and herd health has overflowed across the state of Wyoming and now major wildlife crossings as I previously reported are happening around Kaycee and now a 15 million dollar project is scheduled to open at  Dry Piney in southwest Wyoming.

This is another key area of industrial travel that will help mitigate the state’s roughly 6,000 wildlife related collisions every year. Most of those collisions are mule deer related, putting strains on populations of deer that are already struggling through winter every year.

Education is power in relation to migration routes. Take the time to look at the work that the Wyoming Migration Initiative is doing and it will be easy to understand how and why we have been placing the overpasses, and in some cases underpasses, where we have. Moving into the future with the world in a constant state of development preserving routes and reducing conflict will be key to keeping healthy elk and deer populations.