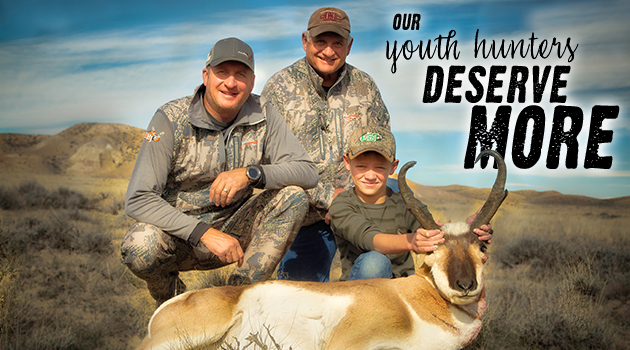 There has been some serious conversation as of late regarding the long-term viability of preference points systems. Many hunters have begun to see the writing on the wall, after years of point creep that there are some serious flaws in these systems mathematically and we may have just slit our own throats as a result of our greed for high-quality big game tags. The final straws to break the camel’s back so to speak were the massive error in judgement in Colorado that more than tripled the amount of hunt applicants to a point where no one entering the system after last April will ever have a hope of drawing a decent tag in their entire lifetime and when some in the Wyoming legislature have yet again began to float the idea of rolling out a point system for resident hunters, well let’s just say the reception for such an idea was less than cool. And here’s one huge reason why.

Nationwide young hunter recruitment is down nearly 20%. This is an extremely alarming trend for those of us who know what that means for the future of hunting. One reason for this catastrophic drop in the West I believe, is the implementation of preference points systems over the past 30 years. For young hunters and newbies to the system the western preference points game has become the barrier to hunting that the lack of public land has become in the East, Midwest and South. The long-term result of a true preference point system like Colorado has is to shut out younger and newer hunters in the system in order to benefit the older and more loyal applicants in the system. The net result, unless you were not on the ground floor of many of these systems, you are screwed! The typical youth hunter in states like Colorado, Utah, Arizona and Oregon will likely never see a sheep tag in their entire lifetime. And the thought of a really high quality fourth season deer tag, or a trophy elk tag during the rut, are probably pipe dreams as well.

Statistics have shown that young hunters adopt hunting early, prior to the age of 15, the reason why many states have begun to lower the minimum legal age to hunt. We need to get these kids and get them early or other activities will capture their interest permanently. Preference point systems tend to push them out past the age of easy adoption which makes hunting compete with video games, sports, and other such activities, which was the case when I was a youngster growing up in Wyoming where the legal age to hunt was 14. Almost none of my high school pals hunted, thank God for my dad and grandfather’s stubbornness.

If this is in fact found to be a major factor to young hunter recruitment, then where on earth do we go from here? That question is as tough as it is difficult to answer as many of us have literally vested decades and tens of thousands of dollars into a system that we thought would someday guarantee us the tag of our dreams, only to find out after 25 years or more of dedication, that mathematically we will probably die before we ever see a coveted tag in our mailbox. There are rough seas ahead for many states as applicants begin to get fed up and give up on these systems both before or after they draw the tag they have been waiting so long for. This along with the lack of hunter recruitment will eventually have a disastrous financial effect on state game and fish agencies throughout the West in the next decade or so.

After publishing an article on the 11 dangerous pitfalls of points systems on our blog at Eastmans.com my inbox soon filled up with feedback from frustrated applicants nation-wide that are rethinking their future contributions to these systems. I don’t have an answer for this problem, certainly not an easy one. But if we don’t figure out a way to get more young and new hunters into the system we will all perish under the weight of our own insatiable lust for the best big game tags in the West.