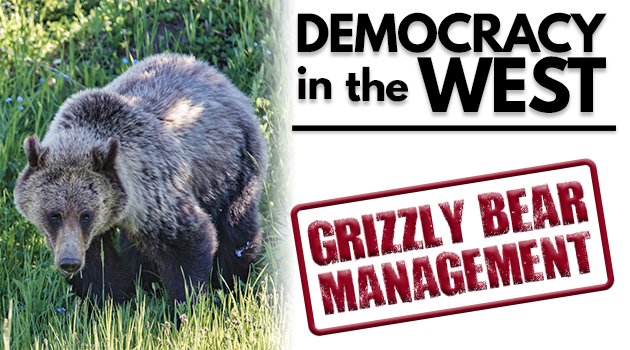 As I walked into the Holiday Inn in Cody, Wyoming Thursday night of November 30th I could feel a buzz in the air. That buzz was coming from the nervous energy that permeated the building from the lobby to the large conference room that the Wyoming Game and Fish Department had reserved for what it anticipated to be a large crowd.

The crowd was indeed large, 176 souls signed the official register for this public forum regarding the state’s management of the recently delisted grizzly bear. As I looked around the room it became obvious that the majority of those in attendance were hunters; camouflage and boots were prevalent as were cowboy hats and ball caps embroidered with hunting logos. However, it was not just hunters who came to express opinions and concerns, non-hunters also ventured forth to participate in what would prove to be an evening of civil discussion revolving around this hot button topic.

The discussion began with a briefing by the agency’s Dan Thompson who serves as a large carnivore biologist out of the Lander, Wyoming regional office. Mr. Thompson’s briefing was aimed at educating the crowd on the various terms used by the Game and Fish Department to center the discourse about to take place.

Discussion and public input would revolve around five core areas; population monitoring, research opportunities, conflict management, outreach and education, and last but probably of the greatest concern to most in attendance, grizzly bear harvest management, or in a nutshell, hunting.

As one can imagine that nervous energy I noted when I first entered the building was growing as folks anticipated heated conversations. Game and Fish personnel had thought this through however and broke the large crowd into small groups by issuing numbered and color coded sticky notes to everyone who walked in. After the initial briefing it was time to get down to brass tacks and the evening entered its breakout phase where the real discussions began. Each small group was facilitated by two Game and Fish personnel, my group was headed up by Chris Queen the Powell, Wyoming game warden.

Mr. Queen walked our group through each of the five discussion topics reminding us all that grandstanding of any sort would not be tolerated and that in order to be productive we needed to channel our comments and opinions into statements which were written down on a large sheet of paper for all to see. This approach was brilliant, by splitting the large crowd into small more intimate groups democratic discourse was allowed to flourish and what could have been a room filled with hostile arguments was kept productive and focused on the task at hand; gathering solid public comment and concern on a very important topic – the future of grizzly bear management in the state of Wyoming.

Each of the five discussion topics were given ample time and ideas were shared. Everything from obtaining accurate population counts, expansion of the current study area, leniency in the handling of conflicts, increasing public education efforts for living and recreating in bear country to breaking down possible hunt areas and quotas were covered.

As I noted earlier, most in attendance were hunters and grizzly bear harvest management was the topic foremost on their minds. My group was adamant that population estimates were not accurate and that before a season could be instituted an accurate number needed to be attained. Once that goal is achieved tag allocation and hunt areas could then be determined. A number of hunters in the group advocated governor’s tags, limited quota drawings with no preference points and generous tag allocations. Another interesting idea was to allow hunters to harvest problem bears or bears involved in depredation cases instead of government officials. All agreed that sticking to the North American Model of Wildlife Conservation by having license fees for grizzly bears directly fund the State’s management plan was imperative.

While not everyone in my group or in attendance was in favor of hunting grizzlies every single person in attendance was concerned about the fate of the grizzly in Wyoming. No one touted an extermination policy, no one expressed hatred toward these great animals, all involved expressed concern, legitimate opinions and proved that civil discourse is alive and well in this great nation of ours. I walked away feeling positive about the future of grizzly bear management in Wyoming and while a hunting season for the big bruins is still on the distant horizon of possibility we are closer now to being able to manage the bears in our own backyards than we have been in a very long time.

5 Tips for Better Long Range Accuracy with Your AR
What Is It With Gear Lists? Part 1