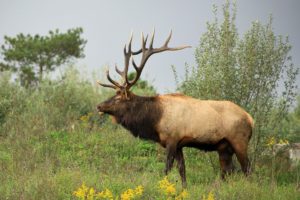 At a hybrid, in-person/virtual meeting January 17 and 18 in Colorado Springs, the Colorado Parks and Wildlife Commission kicked off discussion for the next 5-year Big Game Season Structure (we’re entering the 4th year of the current plan). They will consider shifting to a 7-year structure in the future to allow more time for changes to be studied.  Significant items discussed were:

CPW commission approved a change to remove both resident and non-resident Over-the-Counter (OTC) unlimited archery elk tags from the Grand Mesa Unit DAU E-14 (GMUs 41, 411, 42, 421, 52, 521) to assist with overcrowding (even though the vast majority of the OTC archery hunters in this area are non-residents). A few public comments were heard, and those focused on overcrowding primarily being caused by out-of-state hunters. The commission stated that at a future meeting they will consider removing ALL archery OTC licenses statewide for 2024 and converting them to draw.  Dates & Lengths of Rifle Seasons; Length of breaks between seasons, 4th season over Thanksgiving is not popular, may move it, Option to add Deer Tags to 1st Season, Adding a 2nd season for Antelope (especially for NE corner). Trophy Species Weighted-Point Draw Process Modification. The commission will consider methods of improving the likelihood of high-point holders to draw a sheep, goat, or moose tag. They will discuss moving to a Bonus Point system which is similar to weighted points, but simpler and already used/tested in other states.

Some significant items NOT discussed during this meeting were:

As a side-note, the Commission discussed making Hunter Reporting mandatory.

The Commission meets regularly and travels to communities around the state to facilitate public participation. You can find out more about the commission on the CPW website.
On January 19, the Commission will hold an in-person meeting to hear public comments on the CPW draft wolf restoration and management plan. The next regular Commission meeting is scheduled to take place on March 15-16.